Towards the end of 2000 I wrote a long poem about Hadrian’s Wall for Radio 4, called This Far and No Further. The poem was based on interviews with people who live and work along a central stretch of the Wall, most of them hill-farmers. It contains many voices, including those of the place itself, and those of Iron Age farmers whose fields were literally bisected by the Imperial frontier in 122 AD and thereafter.

My interviews with contemporary hill-farmers revealed a widely-felt sense that their way of life was not always well-understood by the many regulatory authorities who now oversee the World Heritage Site. What is the countryside for: Leisure? History? Environmentalism? Farming? All these competing pressures generated a vast amount of regulation.

Underlying this was a deeper sense of a cultural frontier between an urban, ‘metropolitan’, ‘global’ frame of mind, represented by distant administration and bureaucracy; and a strongly-independent, anti-authoritarian, locally differentiated, rural way of life. There was a deep sense that life lived along the Wall was, and had always been, remote from the centres of power. The bureaucratic mishandling of the foot and mouth crisis which followed in 2001 bore out these concerns. I tried in my poem, and in a subsequent poem, An Ill Wind, to articulate these feelings.

Last week I recorded an interview for BBC Radio 4’s Making History (produced by Nick Patrick) about cultural interpretations of Hadrian’s Wall. Historians Prof Richard Hingley and Dr Christopher Donaldson discussed with presenter Tom Holland what the Wall has meant to people across 2,000 years. I read and discussed some sections from This Far and No Further – then worried afterwards about taking excerpts out of context. Brexit has given the debate between the rural and the metropolitan a more inflammatory cast.

All the more reason, then, to open up the discussion. Seventeen years is a long time, and as Prof Hingley points out, perhaps I should go back and ask the farmers how they feel now. In many ways, the cultural frontier between what is perceived as a metropolitan political elite and those parts of the country which feel that they have no real ‘voice’ seems sharper today. This perceived polarity helped precipitate Brexit; on one level, that vote can be read as a symptom of this deeper unease.

The ‘Farmer vs Romans’ confrontation in the poem is not, however, Brexit. Neither is it nationalistic. Rather, it’s a rural voice protesting all distant, anonymous, undifferentiated bureaucracy – whatever the source. It’s a stand against unrepresentative authority — no more and no less. The interpretation that is put on it might change over time; but the sense of remoteness from the centres of power remains. I hope that, read as a whole, the many voices of This Far and No Further – and my book (called, in recognition of that rural-metropolitan cultural frontier, Two Countries) – may find their way to those in authority, to persuade them to listen to rural voices, to think about local differentiation and distinctiveness, and to consider the complex and manifold meanings of landscape in our culture.

If you would like to hear ‘This Far and No Further’ in full, I will be performing it with Northumbrian piper Chris Ormston at The Riches of Gilsland, in The Samson Inn, Gilsland, Northumberland, at 5pm on Thursday June 1st. The Riches of Gilsland, supported by the Campaign to Open Gilsland Station, Lancaster University and English Heritage, is a free day of exploration of many aspects of Gilsland’s rich history, through local knowledge and academic research. For a full programme, see below: 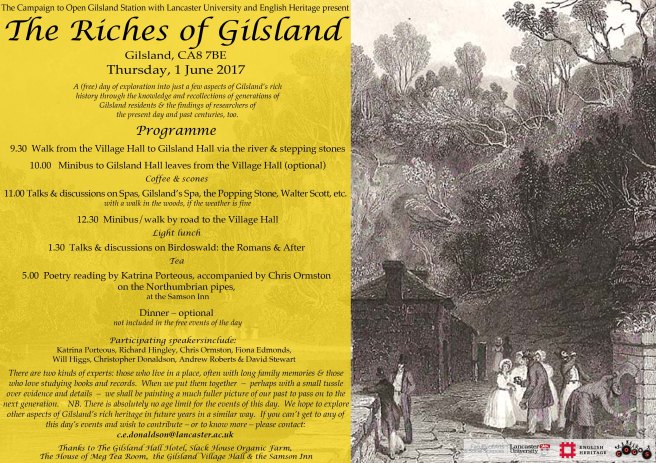