This exhibition brings together work by potter Graham Taylor, photographer Jose Snook and volunteers from the HLF funded Peregrini Lindisfarne Landscape Partnership project, which involved a wide variety of conservation and engagement projects across Holy Island and the adjoining mainland.

Lines from my poem ‘The Refuge Box’ appear on three of Graham’s ceramic vessels. In addition, a series of new poems called ‘Many Hands’, which I wrote to accompany Jose’s portraits, also form part of the exhibition. These draw on volunteers’ responses to the landscape, as well as my own. 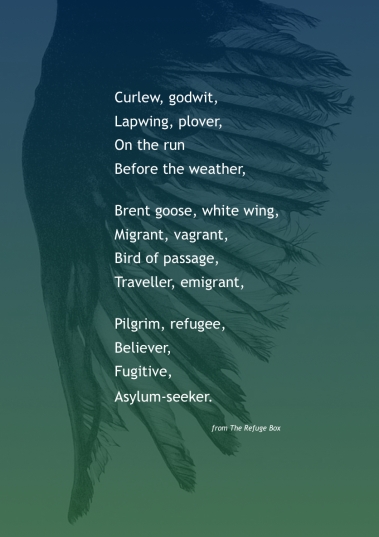 Barter Books is open every day 9am-7pm and its Station Buffet serves delicious food and great coffee. I’m honoured that my poem, ‘If My Train Will Come’ (from ‘The Lost Music’, Bloodaxe Books) appears on the wall in the second room, above the ‘Fine Arts’ section:

I look forward to taking part in a live event with Gloucestershire poet Patrick Mackie in the bookshop in May. Here are the details:

An exciting evening of poetry from Patrick Mackie and Katrina Porteous. While their two voices are very different, they share a common fascination with local, English, and global identities, and the desire to carry the legacy of Edward Thomas into new fields…

This is a great place, where you can buy all kinds of seafood sourced directly from local fishermen. It’s a real honour that my poem ‘Cathy’ (from ‘Two Countries’ Bloodaxe Books) appears on the wall. It’s about a fisherman’s wife and mother, and the importance of women to the traditional fishing industry:

Amble Town Square also includes some circular pavement plaques with lines from my poem ‘The Sea Inside’ (From ‘The Lost Music’).

The new YHA lounge and dining room area at The Sill (Hadrian’s Wall Landscape Discovery Centre) includes excerpts from several poets, including my poem ‘This Far and No Further’ (from ‘Two Countries’):

The next two sites are NOT open to the public, but I’ll include them anyway…

Poems from Imagining the Sun 2016 appear as wall posters, alongside artwork by Helen Schell.

Catrin Jones’ stained glass panels from 1996 included lines from my poems ‘The Sea Inside’ and ‘Wrecked Creeves’ (both from ‘The Lost Music’). The panels, which beautifully depicted sea scenes, were acid-etched on coloured glass. The children commented: ‘We liked the colours and the way it was done, especially the patterns on the glass that really look like the sea. We also liked the verses, but found them a bit hard to understand…’ 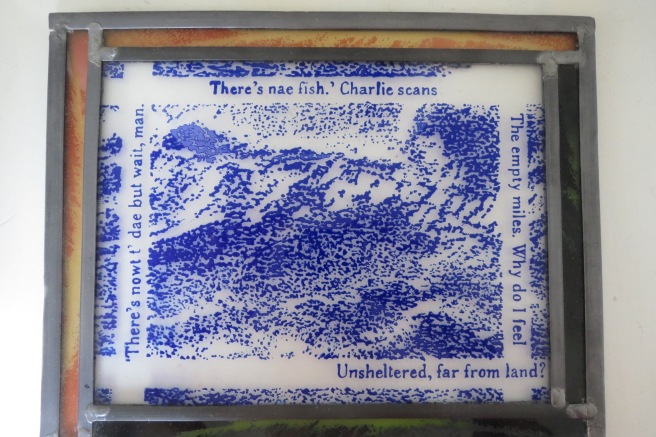 Michael Johnson’s award-winning ‘Timeline’ pavement plaques, and two of his bronze and stainless steel sculptures, including the large outline of St Mary’s Church in the Seaham Hall Beach car park, contain lines from my poems for ‘Turning the Tide’, in ‘Two Countries’. 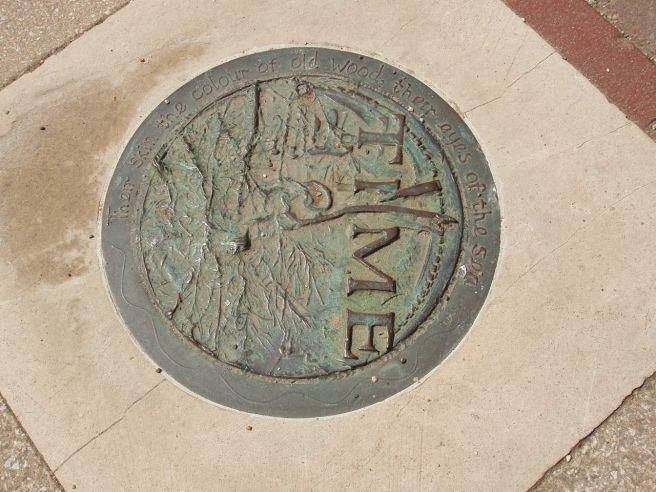 Easington Colliery Memorial Garden at the bottom of Seaside Lane (where it turns south), opened on 29th May 2001 in memory of those who worked and served at Easington Colliery from 1899 to 1993. The date was 50 years to the day of the pit explosion in 1951 that killed 81 men and boy miners from the village and two of those involved in the rescue. Queen Elizabeth II visited the garden in the year of her Golden Jubilee on 8th May 2002. I was commissioned by Easington Colliery Parish Council to write the pavement inscription:

Out of the dark

How far, how deep

Are the workings that made us?

As deep as remembering.

As far as tomorrow.