I’m just back from the 11th Nature Matters event in St Peter’s School, York, still buoyed by its wave of energy. The theme this year was Time for Nature, spanning several thousand years, from the ancient past to the present. There were many highlights, from fascinating archaeologists and paleo-archaeologists Terry O’Connor, Paul Pettitt and Suzi Richer, to incredible female activists: wildlife crime documentary maker Ruth Peacey; ClientEarth lawyer Hatti Owens; environmental poet Sally Goldsmith, involved in saving Sheffield’s street trees; and Isla Hodgson, applying conflict resolution skills to disputes between wildlife and game interests in the Scottish Uplands. Ever since writer Mark Cocker, one of its founder members, introduced me to New Networks for Nature 10 years ago, it has been an important source of inspiration and solidarity for me. New Networks celebrates the absolute centrality of the natural world as it inspires and informs human culture — and it welcomes new people every year. In my own life it occupies and develops a place first identified in the 1970s by Sue Clifford, Angela King, Richard Mabey and others in an earlier influential organisation, Common Ground.

This year Nature Matters was organised by the brilliant Amy-Jane Beer and Ben Hoare. It was extremely encouraging to hear more female voices; to see a younger, more diverse range of people taking part; and, above all, to hear from speakers as different from each other as Feargal Sharkey and Sir John Lister-Kaye, talking about real, grass-roots positive environmental action taking place against the background of species loss and acute ecological emergency. 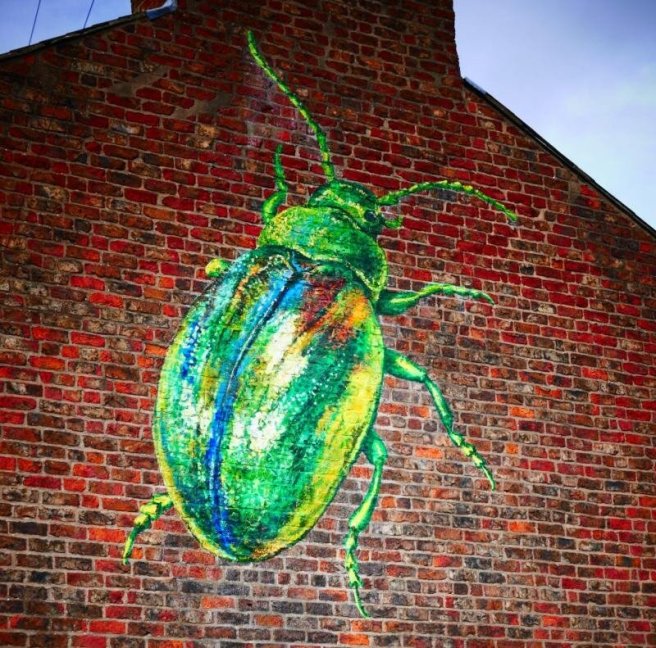 (commissioned by New Networks for Nature)

One of the panel discussions during the two days of talks was entitled New Directions for Nature Writing. The panellists, who included Katharine Norbury, Anita Sethi, Richard Smyth and Zakiya Mckenzie, chaired by Richard Kerridge, discussed the current preoccupation of much British ‘nature writing’ with the personal, and suggested that it needs to open up more to other cultures, and to develop new forms and new styles. This made me think about the place of poetry and song in ‘nature writing’. While the publishing industry is concerned with ‘genres’, poetry – relatively uncommercial – perhaps remains more open to experiment and, in every sense, more ‘free’.

On the first night of Nature Matters, I was honoured to perform alongside writer Nicola Chester, historian Jeremy Mynott and storyteller Malcolm Green, as part of the opening concert by the electrifying folk singer Sam Lee and his band. I adore Sam’s work, his connection with the people from whom he has learnt the songs and with the natural world he celebrates. English, Scottish, Welsh and Irish folk songs, often rooted in the particularity of place, are full of trees, plants, animals and birds, and of fluid shape-shifting ‘supernatural’ transitions between the human and the natural – transitions which are of course universal, as familiar to African, Asian, Arctic or other folk tales as to our own. I’ve always felt a strong connection to folk traditions in my own work, not least because of their anonymity, the communality of song passed down the generations. That is an excellent antidote to the dangers of solipsism, identified in some contemporary ‘nature writing’. 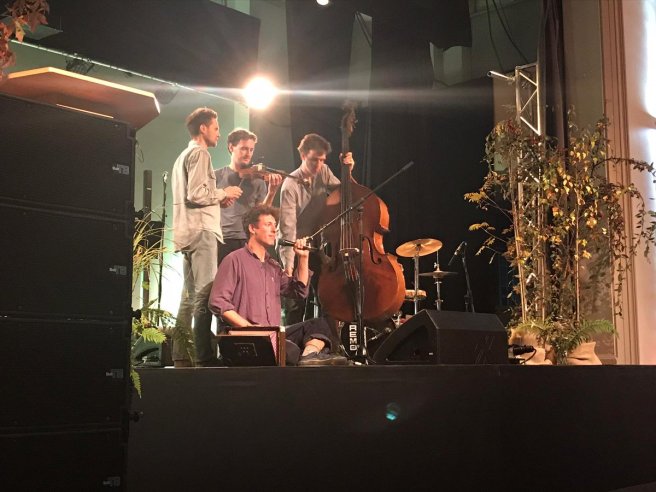 My own third poetry collection, Edge, was published by Bloodaxe Books last week. The book is made up of three poem sequences which stretch the definition of ‘Nature in Time’ as far as possible. Their theme is cosmology and astrophysics. All three sequences were written as collaborations. I worked, on the one hand, alongside university scientists researching in those fields and, on the other, alongside the brilliant inventor and electronic composer, Peter Zinovieff, who wrote the multi-channel music for them. A third element of collaboration was provided by Life Science Centre planetarium in Newcastle, who hosted the premier of each piece, with fantastic full-dome planetarium visuals selected from real space photographs.

Edge is an unusual book, not just because of its collaborative origin. For one thing, the poems contain almost no people. I want to explore the landscapes of other worlds against the almost unimaginable scales of nature: to remind myself and my readers that our planet is 4.5 billion years old; that life has existed on it for possibly as much as four billion years; that it has witnessed six mass extinctions; and that, depending on how you define them, human beings have been around for only half a million to a million of those years. Hardly anything at all. Our planet does not need us. I want to create a poetry that reminds us of these things – not to belittle humans, but to recalibrate our place in nature, in order to celebrate more powerfully the wonder, the true value, the extraordinary miracle of conscious life.

A literature student in the audience at Nature Matters, who heard me read from Edge at Sam Lee’s concert, asked whether I consider myself an ‘eco-poet’. Apparently that is a genre now. I’m suspicious of any commercial or academic categorisation. But how can any of us, striving, as poets must, to be true to the time and place in which we live, not be eco-poets? In that sense, the poems which I wrote in the 1990s  about the old, sustainable traditions of the Northumbrian inshore fishing community, were ‘eco-poems’. My friends at Common Ground recognised this, because they were poems about the relations between human beings, our culture and language, place, and the natural world. ‘The sea’s the boss,’ fisherman Charlie Douglas would say, meaning that nature is always ultimately in charge of our lives. Similarly, when I wrote poems about the reclamation of former industrial land for the National Garden Festival in Gateshead in 1990, those were ‘eco-poems’. Again, when I wrote for Turning the Tide, about the project to clean pit waste from the Durham beaches in the late 1990s, those too were poems exploring our relationship to our environment, particularly to fossil fuels.

Most of the poems I’ve written in the last 20 years, including many of those in my second collection, Two Countries, draw on a variety of ‘voices’, imagined and real. My radio poem, Dunstanburgh, for example, is made up of the voices of that place – kittiwakes, skylarks, swallows, the wind – and scraps of local speech, like fragments of folk ballads. Sometimes two or more voices speak simultaneously in the poem, to abstract them and anonymise them further, so that they flow almost into pure music or wild sound. The Refuge Box, similarly written for radio, contains the voices of grey seals, geese, drowned travellers, old fishermen, chants and incantations, scraps of memory, history, myth and speech. All those voices are imagined or reassembled or conducted by me, but none of them is me.

Sometimes nature writing is accused of ‘escapism’, of turning its back on the social, political and ‘identity’ issues of our times. This can undoubtedly be a real problem with the genre. But I would argue that, at its best, nature writing is the opposite of escapism: that it can and should be a vital reminder of our place in the greater web of nature, which we forget at our peril. Our relations with place and nature lie at the very heart of our politics, because they determine what it means to be human. To elevate anthropocentric social and political issues above our relation to our environment is dangerous. The truth is, I don’t particularly want readers to listen to ‘my’ individual voice. I do want them to listen to the multiple and often conflicting voices I present to them or conduct for them – which are of course inevitably mine too, but also, in a complex variety of ways, not mine; and I hope that those voices might help readers to listen to nature directly themselves, and perhaps lead towards less narrowly ‘individualistic’, less ‘anthropocentric’, interpretations of the natural world.

Like those long landscape poems made up of many voices, the poems in Edge are not lyric poems. They use a variety of voices to sing the miraculous — the nature of a reality which we are only beginning to understand. We sit, like the inhabitants of Plato’s cave, looking out through a tiny window at that reality. Our place in our own planet’s history is minuscule, yet our impact is enormous. Our hope lies in our consciousness of these matters, and in our ability to imagine — to ask questions and find solutions. Poetry and science share a common root in these endeavours. I hope that the poems in Edge might encourage readers to imagine; that they might offer a different perspective on nature — and indeed on ‘nature writing’; and that they might – as nature writing always has – sing the miracle and beauty of being alive and conscious in the Universe, here and now.

You can find audio and / or audio-visual versions of some of the poem sequences from Edge, with Peter Zinovieff’s multi-channel music rendered for stereo, by clicking on these two links:

You can hear me perform different aspects of my work at a number of forthcoming events, including:

Although prose poetry is not my usual form, I have a poem — a lyric poem! — in this lovely collection, and will also give a short reading from Edge alongside other poets in the anthology, including editors Anne Caldwell and Oz Hardwick.

I’ll perform a full version of Sun with stereo music and flat screen visuals as part of this event.

Words Weekend – Poems from the Edge of Extinction with Chris McCabe

I’ll perform Northumbrian dialect poetry as part of this event about poetry in endangered languages. Also reading are Peter McCarey in Scots and Chris McCabe in Scouse. 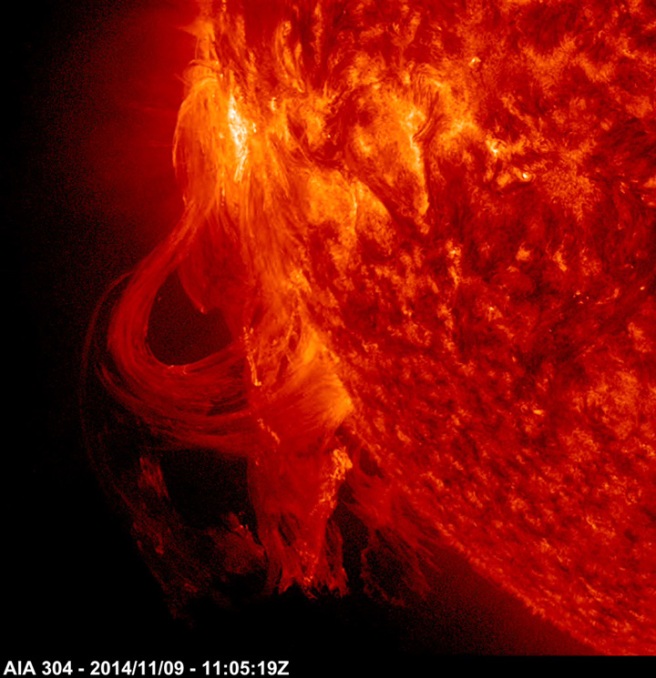 You can find my previously-unpublished poem Invisible Mending in this new, beautifully-illustrated anthology from Fly on the Wall Press, Planet in Peril, available HERE.