April 15th should have seen the premier of ‘The Garden of Earthly Delights’, a new hour-long, 8-channel, surround-sound comic opera by composer Trevor Wishart, at the Royal Conservatory, Den Haag. I am so proud to be one of its three librettists, the others being Martin Riley and Trevor himself. The premier has, like so much else this year, been postponed due to the current health crisis. But we still have it to look forward to.

My brief from Trevor was to write a poem in Northumbrian dialect for ‘the Forest Path’ section of the Garden. Trevor’s idea for the opera, which he has composed over four years, was partly inspired by Hieronymus Bosch’s painting of the same name, which Trevor explains he has re-imagined for the 21st century and for the medium of sound. In this Garden, Bosch’s simultaneous image is ‘replaced by the viewpoint of a wanderer through a maze, who stumbles upon different situations, to which she constantly returns, only to find that these situations have shifted in her absence.’ One of these is ‘the Forest Path’. ‘Garden’ is the final piece in Trevor’s series exploring the musical possibilities of human speech using processes of metamorphosis, and deals explicitly with narrative. Each of its seven threads, he writes in his ‘Official Guide’, presents a different narrative, and each has metamorphosed whenever we return to that thread. On the flyleaf, his words offer to guide you through the labyrinth, but warn: ‘unfortunately we cannot guarantee to find the exit.’

Before I began, Trevor described in some detail what he wanted for ‘the Forest Path’. ‘Cross the style and follow the path which enters the wood. After a short ascent cross a small stream. The path continues to climb until trees give way to open country and, finally, the summit is reached.’ The poem should be in broad, old-fashioned, at times almost incomprehensible, Northumbrian dialect. Playing on the interest we each have in the musical, expressive qualities of speech, many of the words would be lost in the setting, but that should not matter. The sounds of those words should lead the sense. The song should be positive, joyous, uplifting, celebrating the unity of nature, and should be folksong-like, with ancient echoes of Orpheus, ‘father of songs’, and of the first Northumbrian poet, Caedmon.

I began by playing around with some Northumbrian place names. I love the abstract sounds and playful references in farm names like ‘Biteabout’, ‘Sillywrae’, ‘Whaupweasel’ and ‘Whirleyshaa’s’. These became the first stanza of the song. Then I imagined myself into a specific hilly landscape which I know well, on the Northumberland-Scottish border at the end of the Pennine Way. Into it I wove some references to Orpheus. Some of these were so obscure only I would recognise them. For instance, I often work with another electronic composer, Peter Zinovieff, who wrote the libretto for Sir Harrison Birtwistle’s opera ‘The Mask of Orpheus’; so for Trevor’s ‘Garden’ I borrowed the idea of the Fourth Arch, which becomes the ‘hemmels’, or arched cow-byres, set alight by Border Reivers. More obviously, the refrain ‘Nivvor keek back’ means, in Northumbrian, ‘Never look back’, a reference to the Oracle’s instruction to Orpheus in the Underworld. Caedmon appears in the references to wild landscapes – the ‘jumm’ly-bed’ (boggy ground), ‘howps and howes’ (valleys and hollows) – and wild creatures, such as the ‘mowdie’ (mole), ‘linty’ (linnet), ‘laverock’ (skylark), ‘blackclock’ (black beetle) and ‘flee’ (fly). I wanted to suggest the unity of nature, its vulnerability (‘the ice a-thaw’), and our part in its ‘yen mash’ (one mesh). I have heard all the words and speech patterns in the song used by Northumbrian fishermen and shepherds in my lifetime. I’ll include a full glossary at the end of this post.

The title, ‘Lowp the Dyke’, refers to the Northumbrian folksong ‘Sair Fyel’d, Hinny’, in which an  old man laments to an oak tree that he can no longer jump (‘lowp’) the obstacles of his youth.

Trevor explained how he would use my words. In his introduction to ‘the Forest Path’, he writes: ‘The narrative concept involved a walker in a wood who sings to herself, to which the forest responds’. He had quite a precise requirement for line and verse length, as well as linguistic tone, which led to considerable rewriting, expanding, rearranging. Some months later, he sent me a simple setting of my words. It’s a beautiful, lyrical, traditional melody. Trevor explained that he wanted an ‘irregular’ interpretation, unlike that of a professional singer. Would I sing it for him? I’m not a singer, so my rendering would certainly be ‘irregular’. With the help of a pianist friend, I had a go. Then in January last year, I visited Trevor’s home studio in York to record it. Although we had originally discussed recording in the actual Borders landscape to which much of the song refers, its remoteness and upland windiness made this impractical. 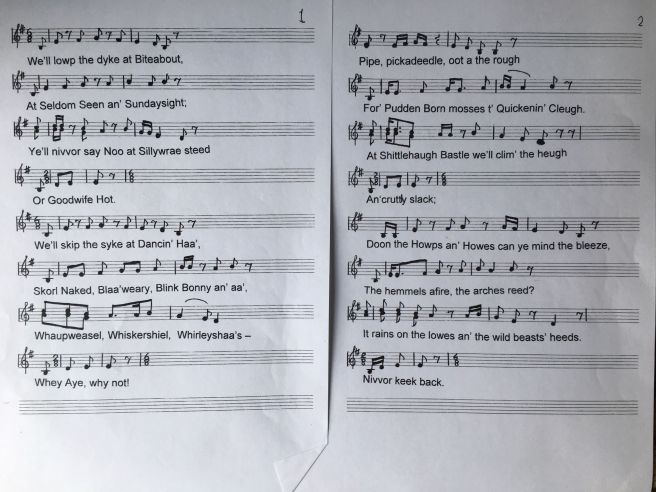 The version Trevor wanted was deliberately rough and breathless. I had to practise over-breathing and even singing some notes off-key, ‘as if singing while concentrating on effortful walking’. For the finished piece, Trevor exaggerated these effects in the studio. As he suggested, many of the words of the song are lost in pure sound. I’ve reproduced them here in full for those who are interested. In his introduction to ‘Garden’ Trevor explains some of the sound-processing tools he has developed for each section. For ‘the Forest Path’ he mixed my processed voice with natural sounds: footsteps over earth, reedy grass and gravel, and the sound of a stream recorded on Ilkley Moor; footsteps over tumbling rocks recorded at abandoned mine workings in the Lake District; birdsong recorded by David Lumsdaine in the Australian bush. I have heard a stereo mix of the result, and it’s thrilling. I can’t wait for the full 8-channel experience, and to hear ‘the Forest Path’ in the context of the whole ‘Garden’.

Lay me doon under the jumm’ly bed an’ tummellin’ sky…

For more information about Northumbrian dialect words and their usage, please follow this link to The Northumbrian Language Society.