FisherPoets
FisherPoets is a creative celebration of the commercial fishing industry in poetry, prose, storytelling and song. FisherPoets from the US coasts east and west to Alaska include Jon Broderick, Jay Speakman, John van Amerongen, Jon Campbell, Katrina Porteous, Geno Leech, Meghan Gervais, Steve Schoonmaker, Meezie Hermansen, Clark Whitney, Pat Dixon, and Mary Garvey. Join these artists from the annual FisherPoets Gathering in Astoria, Oregon, some of whom have attracted the enthusiastic attention of national and international media.
WHERE IS THIS EVENT?  YOU’LL RECEIVE LOGIN INFO BY EMAIL AFTER YOU’RE REGISTERED.
​$10 / Free with All-Festival Art Pass

The FisherPoets began in 1998 with a small gathering of far-flung friends, all fishermen and women, meeting in a pub in the former cannery town of Astoria, Oregon, at the mouth of the Columbia River, to share their poetry and songs. This get-together became an annual event, organised every February, when the fishing is quiet, by fishermen Jon Broderick and his friend Jay Speakman and others. It’s attended by fisher poets from all over America – Florida, Maine, Chesapeake Bay and Alaska. Hundreds listen: there are sessions in bars and readings all over town, workshops, exhibitions, and the community radio station broadcasts proceedings live. Occasionally, some of the fisher poets get together at other times to perform. This event, part of the Alaska World Arts Festival, based in Homer, Alaska, is such an occasion.

A few years ago, in 2014, I had the privilege of taking part in the FisherPoets’ Gathering. This was made possible by BBC Radio 4, for whom I presented a documentary covering the event, produced by Julian May. I heard astonishing work: from Dave Densmore, on his boat Cold Stream; from Moe Bowstern, an extraordinarily prolific writer about the lives of fisher women; from Richard King who fishes in Alaska, and farms in Hawaii; and from Lloyd Montgomery, an Aleut fisher poet. Wherever they were from, I found, fisher poets share concerns over sustainability – of fish stocks, of their communities, and of their way of life. You can still hear my documentary HERE.

Now, due to the strange conditions of 2020, I have an opportunity to catch up with the FisherPoets and to perform with them again – this time as part of a virtual event. The 7pm start is Alaska time, so it’s an unsociably early hour (or a late one!) if you live in the UK. Still, fishermen are used to getting up at 4am. The event will last up to 2 hours.

If you’re wondering about my credentials as a FisherPoet, here’s my background. I live in a fishing village in Northumberland and have written about local fishing traditions since 1990. Throughout the early 1990s, I was very closely involved in the community’s working life, going off to the potting with Charlie Douglas aboard his coble in his last year, taking turns to row the Douglas’s trouting boat, and working with gear in their huts, ‘putting on’ nets and mending creeves. I haven’t done much hands-on fishing for a long time now, but I’m still closely involved in what remains of our fishing year.

Sad to say, 2019 was the first year salmon fishing was banned altogether on this coast, and this year, 2020, boats have not fished for sea trout either in our bay. The reasons are complicated: declining salmon stocks have led to ever-greater restrictions imposed by the government’s Environment Agency, while the Atlantic Salmon Trust has bought out most of the remaining netting licences. I gave a talk about this to an international conference, ‘Owned by Everyone: the plight, poetry and science of the salmon’ in Cambridge last December. The proceedings of that gathering are due to be published later this year, and you can read more about that HERE. The conference focused on the poetry of Ted Hughes, who I think would have had sympathy for the traditional netsmen’s plight. I very much wished that some of my fellow FisherPoets could have been there.

One of the things that fascinated me about the FisherPoets’ tradition was the number of female fishers on the West Coast of the USA. I haven’t come across many British female fishers, but I did meet one inspirational woman skipper volunteering for the North Shields Fishermen’s Heritage Project last year. Here’s a recent song-lyric, Low Light, loosely based on what she told me. It’s published alongside a photo of Ray Lonsdale’s memorial to fishermen lost at sea, ‘Fiddler’s Green’, in the book Tyne Anew: celebrating public art in North Tyneside (Northern Voices Community Projects).

At the Alaska World Arts Festival event, I’ll read a poem from The Lost Music, and probably one from Two Countries, too. They’re available HERE. Do join the FisherPoets if you can for a life-affirming and truly international event of fishing-related poetry and song on the night of September 19th (or morning of Sunday September 20th!).

What do birds mean to you? Do they matter? How would you feel if they disappeared? Some years ago I was lucky enough to lead some ‘nature writing’ workshops with the naturalist Mark Cocker, author of the magnificent ‘Birds and People’. Mark helped me to understand how deeply birds are enmeshed in our cultural and emotional lives, in the very language and metaphors we use to explain ourselves. In particular, we use their flight as an image for some of the most elusive things we wish to express, the movement of the mind, spirit or imagination. Some of us still use them in a more practical sense, too, as calendars, eagerly awaiting the arrival of the first swallow in April or, here on the Northumberland coast, marking the beginning of autumn with the departure of the Arctic terns (in my sketch below).

Birds have been important to me throughout my life. I’ve written and spoken elsewhere about what the song of the blackbird has meant to me, from my earliest memory of lying in my pram before I could talk. The patterning of sound in those short phrases of blackbird song or in a skylark’s lengthy improvisations is fascinating to a poet. The brevity of an individual bird’s song, and the fragility of its life, contrast with the apparent timelessness and ubiquity of that song. Countless folk songs and poems, from Keats’ ‘Ode to a Nightingale’ to the spellbinding work of folk singer and conservationist Sam Lee, capture a shared emotional response to sounds still just about familiar to most of us.

On the coast where I live birds are culturally meaningful in other ways. Fishermen I knew who were born before World War One used certain birds as weather ‘signs’. It was as if the birds’ sensitivity to atmospheric conditions gave them ‘knowledge’ of the future. The fishermen’s bird lore reminded me of how, in ancient cultures, birds were used for divine augury. For many of us, birds still carry a sense of mystery. Where do the migrant species go? How do they know when it is time to leave and how do they navigate over such vast distances? Birds shrink the planet for us, and seem to possess an insight that we do not. No wonder people in so many cultures have thought of birds as ‘go betweens’, messengers from elsewhere.

Below: sand martins nest in burrows above a 7,000 year old layer of peat at Hauxley. 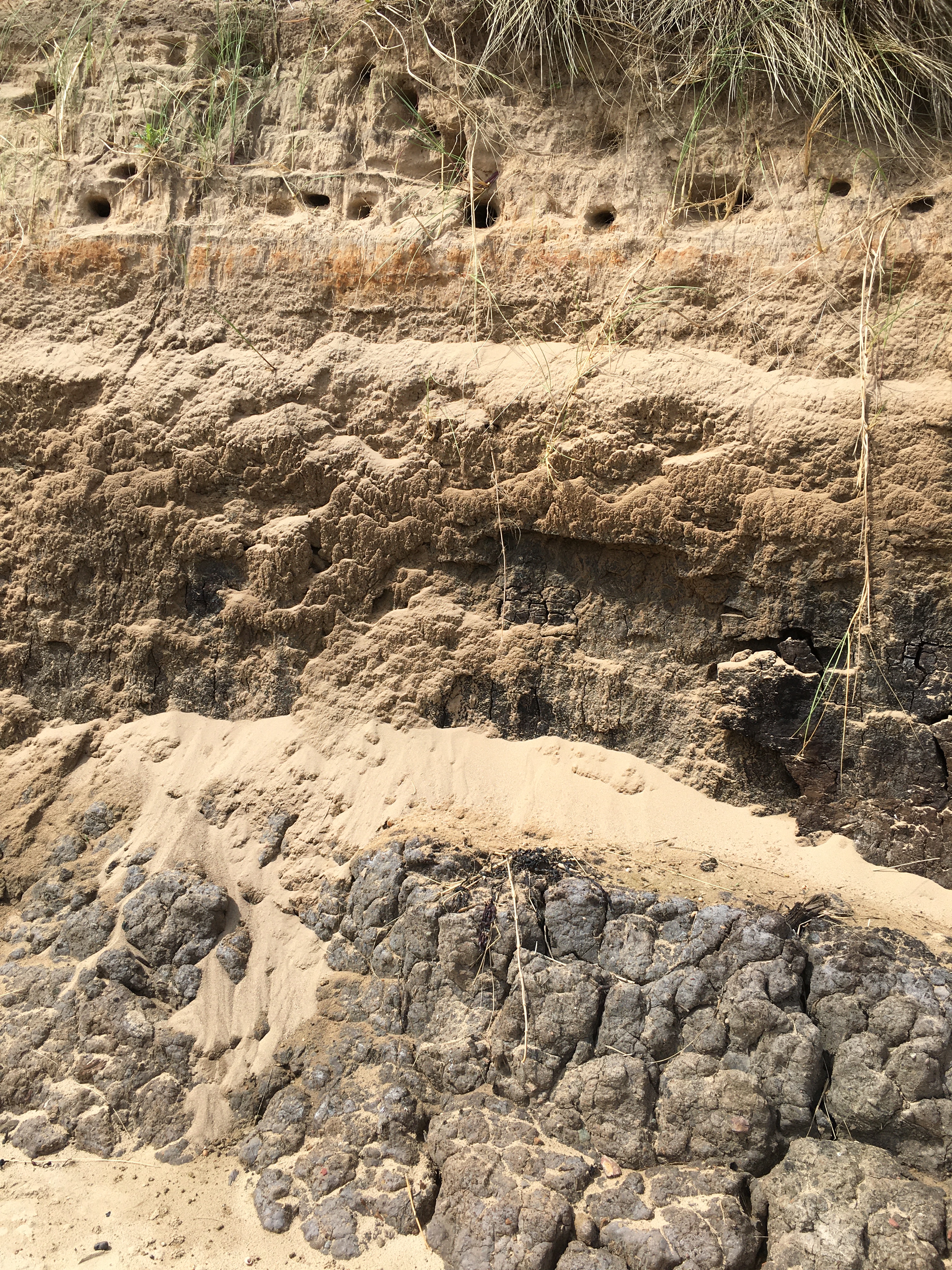 In my lifetime, scientists have made vast progress investigating many bird species’ behaviour. Geolocators fitted to an Arctic Tern from the National Trust’s Farne Islands reserve recently recorded that the distance of its annual migration to and from Antarctica was the equivalent of twice around the circumference of the globe in one year. Even tiny birds like the goldcrest – five grams of feathers, a vivid eye and a rapid heartbeat – travel vast distances. Why? For how long have they done this? Instinct, now backed by science, suggests that birds are much older than the human species. Their lineage is Mesozoic, their evolution from a group of dinosaurs (theropods) evident from the fossil record, with clues visible from close observation: just look at their skeletons, their scaly feet. Perhaps we sense in their long evolution some clue to survival.

At the same time, we have become increasingly aware of the declining numbers of many species and the pressure of human activity on their lives. Where are all the urban house sparrows? The ‘peewits’ (lapwings) I remember from my childhood have almost disappeared from the fields. Meanwhile, other species, like grey herons, have proliferated on this coast. Certain charismatic species, such as the puffins, eider ducks and roseate terns which breed on the RSPB sanctuary of Coquet Island, are better protected than they ever were. Old industrial workings have been reclaimed and now flourish as nature reserves, as at the old Hauxley colliery site, reborn as the wonderful Hauxley Wildlife Discovery Centre.

These changes will be on my mind this autumn, as I write new poems for ‘The Bird Roads’, an audio collaboration with wildlife sound recordist Geoff Sample. Our collaboration will be part of ‘Amble Bord Waalk’ (Bird Walk), a project commissioned by Amble Development Trust, to develop ‘a bird-themed sculpture trail of national significance’, with physical and virtual-reality models, from Druridge Bay to Warkworth, aligned with the new England Coast Path. My poems will draw on my own observations along the walk, Geoff’s field recordings from the sites, fragments of local speech and comments, and observations by the sculptors on their artworks. Our six short audio pieces will be realised through an app which will accompany the Walk, and our intention is to lead listeners into connecting more deeply with the landscape and its wildlife.

The ‘Bord Waalk’ is partly aimed at creating jobs in tourism, as part of Amble’s very successful regeneration. I want my poems to be as much for local people as for visitors. Amble holds a special place in my affections. Thirty years ago I spent two weeks as ‘poet in residence’ in a number of Amble schools, including Edwin Street First School and what is now James Calvert Spence College. That was my first ever ‘residency’, and I shared it with a more experienced writer, Peter Mortimer, author of ‘Last of the Hunters’. My aim was to get the children writing their own poems, and for inspiration I took them to the harbour, to talk to retired members of the fishing community (see the picture below). The friendships I made at that time were the start of a relationship with the town and its fishing families which has shaped my work for three decades.

You can find my poems from that time in my first Bloodaxe collection, ‘The Lost Music’ and later Amble poems in ‘Two Countries’. Lines from my poem ‘The Sea Inside’ are carved into two roundels in the pavement of Amble Town Square (below): 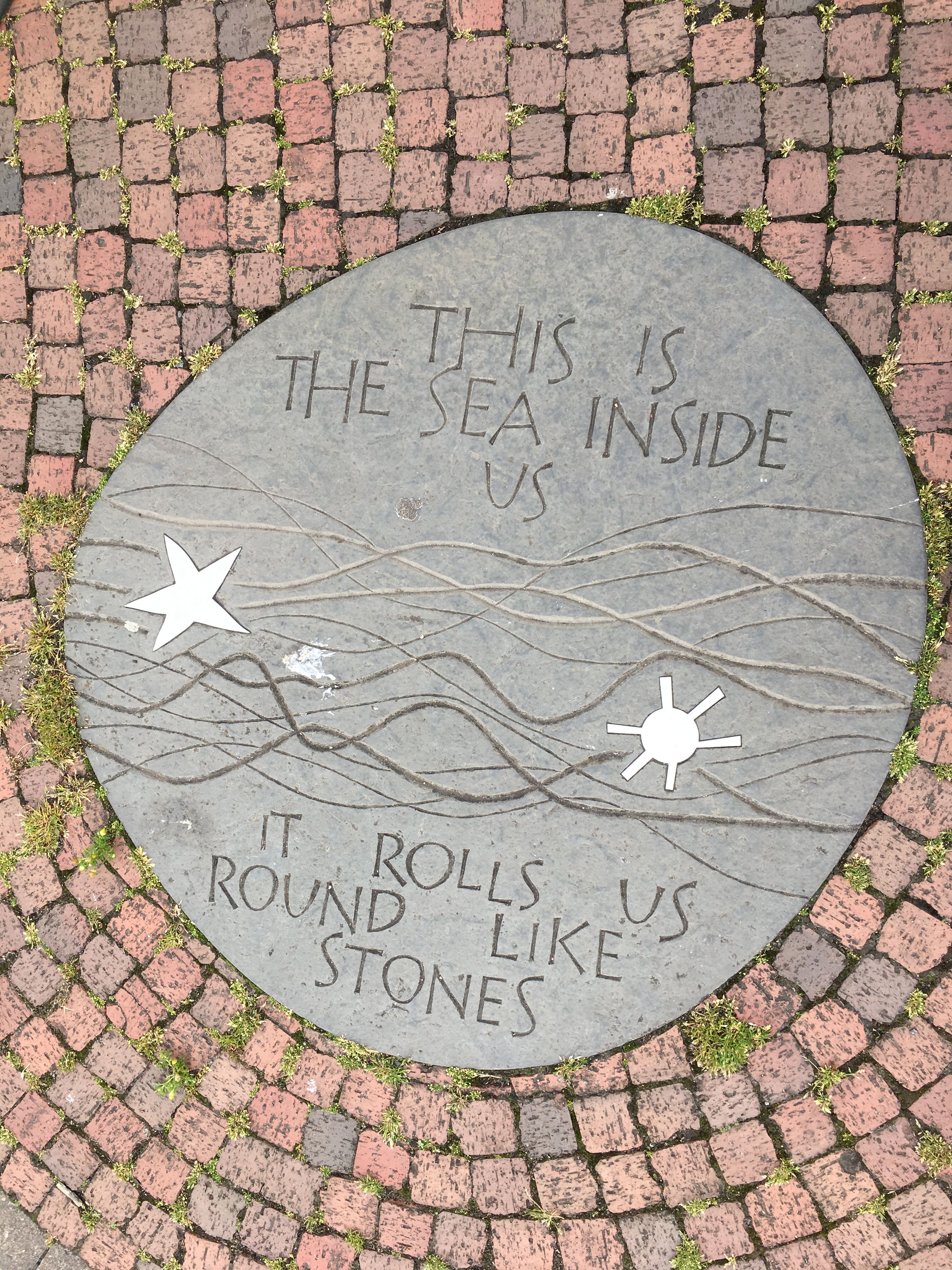 Now the Amble ‘Bord Waalk’ brings me back to this lovely part of the coast. The birds we live alongside, whose calls accompany us, are a window into our wider relationship with our environment. They are indeed ‘go betweens’. I hope that the new Amble sculpture trail will make everyone, not only visitors, reflect on the importance of birds in particular, and of biodiversity in general. These things are immensely important in themselves, and we must do everything we can to protect them, whether that means reducing plastic waste or carbon dioxide emissions, energy or water use, or understanding more about our impact on climate change. They are also important to our sense of who we are. Perhaps the Ancients were right, and birds are auguries of our future. They are so enmeshed in our cultural lives that, as we lose our biodiversity, we also lose part of ourselves. By encouraging the interpretation of place through its bird life, I hope that the Amble ‘Bird Waalk’ will remind us all of this vital connection.

The Amble ‘Bord Waalk’ is funded by the Coastal Communities Fund, and will be unveiled in Spring 2021. 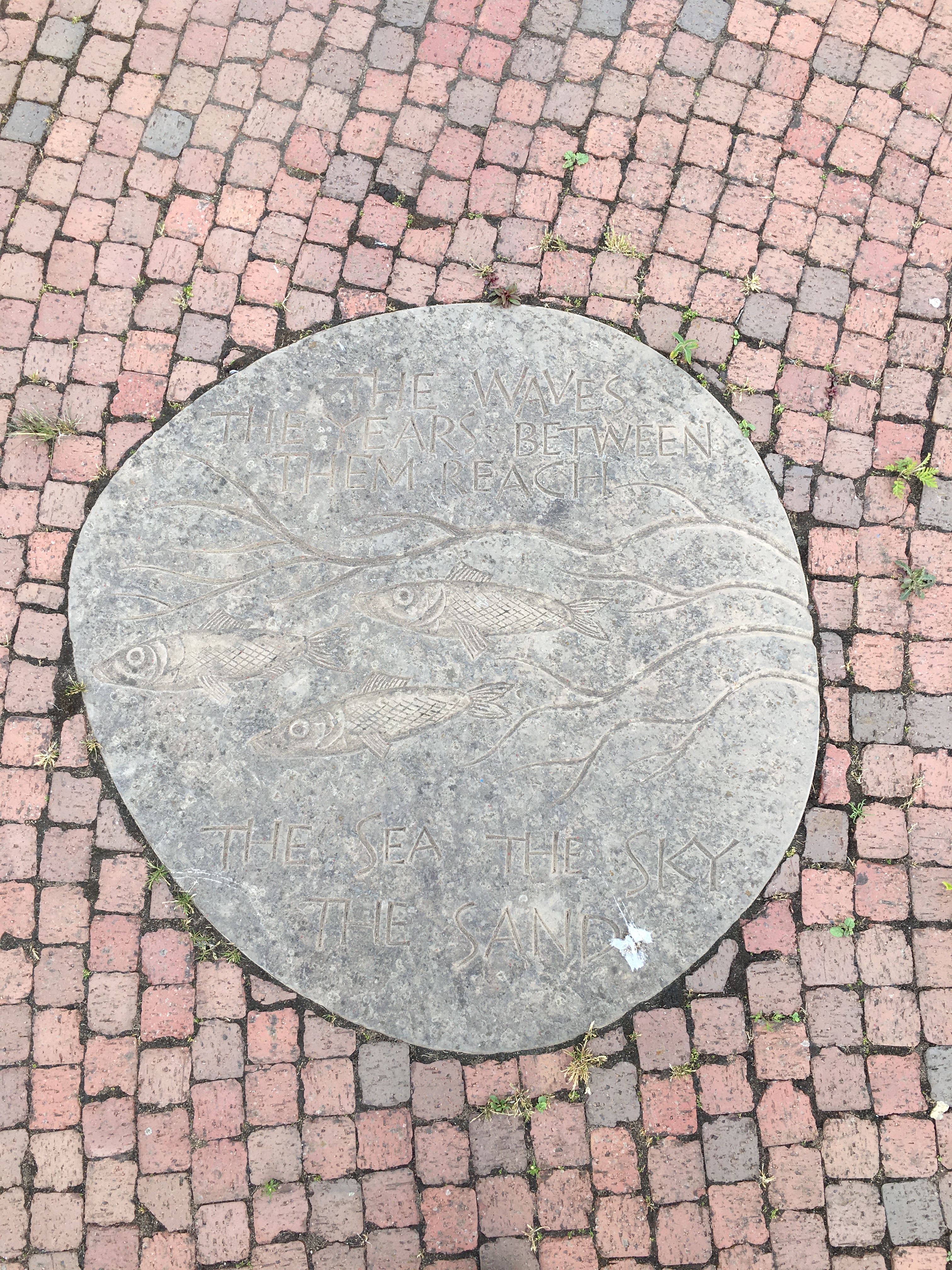